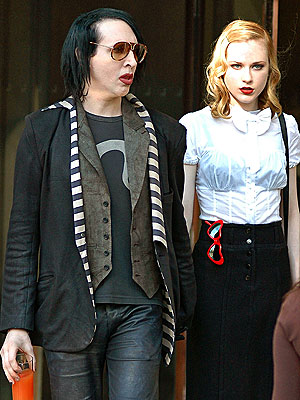 MarilynÂ still seems like he’s enjoying getting hisÂ Wood on.Â  Sorry, couldn’t resist no matter how bad it was.

Marilyn Manson & his new ladyfriend, Evan Rachel Wood, stepped out together in London on Thursday.Â  The pairÂ kinda seem like theyÂ go together, even though I’m still convinced that the young Wood is trying to be Manson’s ex, Dita VonÂ Teese.

Anyhoo, the pair, despite their 19-year age difference, are enjoying themselves.Â  I wonder what kindÂ of kinky, crazy sex they have anyway…..

In a recent interview with aÂ FrenchÂ newspaper, Manson was quoted as saying the age differenceÂ isn’t a big deal, saying, “That’s not a problem for me. She likes the same things as me. She understands I like to get up when night falls and go to sleep at dawn.”

Because I’m a vampire, you know.Â  A vampire.