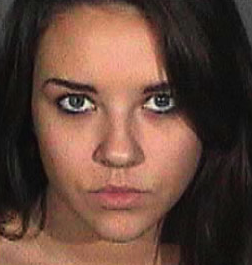 Why do Los Angeles courts even bother assigning longer prison terms? You can literally get sentences to 180 days and be out in 30 due to over crowding, that’s exactly what happened to the Orlando Bloom home burglar Alexis Neirs who was released on Friday.

Here’s a funny turn of events, Neirs, who starts in ‘Pretty Wild’ was in a cell right next to Lindsay Lohan who just began serving her only 90 day sentence, of which she is expected to serve less than 30 days.

If you’re unfamiliar with Neirs, her little teen crime syndicate also allegedly broke into Lohan’s home, I wonder if the two had a chance to talk while in prison?

Neirs’ publicist released a statement in which Neirs said she “did a lot of soul searching” while behind bars and “I feel very humbled and see my life in a way that I have come to be very grateful for and I am also grateful to everyone who has helped and supported me through this.”

In other news…Neirs probably didn’t mean anything she said, she’s a whole lot of crazy, but that’s just my opinion.