.
You are here: Home / Celebrities / Pink Confirms Pregnancy On ‘Ellen’ 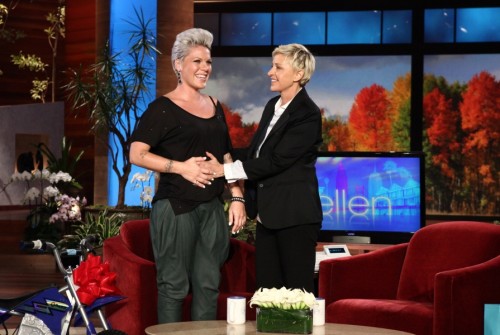 Singer Pink confirmed on Ellen today that she’s having a baby.

“I’m eating for two these days,” adding “I don’t think I want to know [the baby’s sex], but the doctor kind of told me what she thinks. I’m terrified because she thinks it’s a girl.”

Pink also revealed that she wasn’t quick to announce her pregnancy because of a previous miscarriage:

Ellen also asked Pink about her relationship with Carey (the couple had divorced in 2008:

“…I never had anything in my life that I didn’t work hard for and my relationship is that. We worked really hard and we had our little meltdowns, a couple of them, and now, we’re honestly, we both needed to do that and come back together. It’s just yummy.”

Pink is approximately 4 months along.