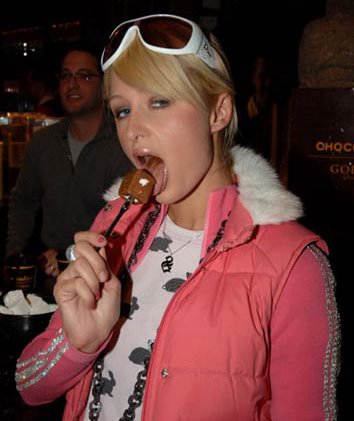 Well, Paris Hilton is making herself at home in her 12×8 feetÂ jail cell with toilet, wash basin & two windows.

From reports, Hilton is being called a “modelÂ citizen” by jail staff & is actingÂ graciousÂ as well as polite.Â  Hrmmm, that doesn’t sound like the ParPar thatÂ I know.Â  MaybeÂ HiltonÂ did allow that fan to change seats with her….

According toÂ TMZ, our favorite Hilton is wearing a short-sleeve orange jumpsuit & the makeup that she was wearing on Sunday night when ParisÂ entered the facility.Â Â She has been able to keep her infamous extensionsÂ in due to the fact that they are “tightly wound”.Â  I wonder how many rules theÂ jail is makingÂ up so Paris can get away with stuff…..Â

Also, is doesn’t look like Paris is integrating with the jail population as of yet & the poor thing missed lunch Monday due to being caught up in a meeting with her attorney.Â  Poor litte ParPar, having to go without lunch.Â  I can’t wait to see what happens on like day 19, where Paris is teaching her cell mates about proper care of cuticles.