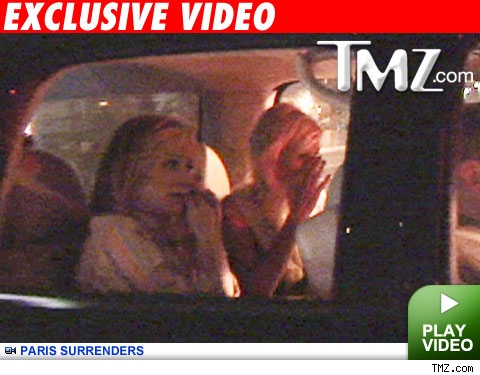 Well folks, we’re officially living in a Paris-Hilton-in-the-pokey kind of world.Â  I don’t know if I can make it without the princess for 23 long days..

Paris Hilton turned herself into the Los Angeles County Sheriff’s office Sunday evening.Â  Hilton was picked up by her attorney Richard Hutton at her parent’s home at 10:30pm where mama Kathy & sister Nicky drove with Paris to see the heiress off for her 23-day sentence for driving with a suspended license.

Due to paparazzi being stationed at the jail where Paris will be doing her time, the authorities arranged this late night drop off.Â  Hilton is now currently serving her sentence at Lynwood jail.

The Sheriff devised the plan of surrendering miles away from the actual where Paris will be doing time because the crush of paparazzi at the jail created a potential safety hazard.

Paris was then driven to the jail in Lynwood where she is now serving her sentence.

“I am ready to face the consequences of violating probation. During the past few weeks, I have had a lot of time to think and have come to realize I made some mistakes, ” ParisÂ recently stated.Â

“This is an important point in my life and I need to take responsibility for my actions. In the future, I plan on taking more of an active role in the decisions I make. I want to thank my family, friends and fans for their continued support. Although I am scared, I am ready to begin my jail sentence.”

Ahh, a world with Paris Hilton behind bars…. What’s next?Â