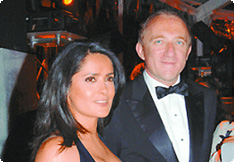 So, we’ve all beenÂ wondering about the chubby & scruffy lookingÂ sexypants Salma Hayek & what happened toÂ her.Â  Well, guess what?!Â  It looks like she is not only pregnant but engaged as well!

Hayek’s rep just confirmed the fact that Salma is pregnant & is engaged toÂ an old man who happens to be a French dude who isÂ the CEO of the parent company of such brands as Gucci &Â Yves Saint Laurent, incidentally he also comes from a very wealthy family.

“Businessman, FranÃ§ois-Henri Pinault, and his fiancÃ©e, Salma Hayek, are happy to announce they are expecting the arrival of their first child,” Hayek’s rep confirmed in a statement Friday.

The news, first reported by New York Daily News columnist Ben Widdicombe (via gossip site Perez Hilton), comes just days after a photo of Hayek made the Web rounds prompting speculation that she was expecting.

The pair have kept a relatively low profile since their relationship began â€“ though Hayek, 40, has joined Pinault for occasional public events, including one in October at the festivities surrounding the inauguration of the Pinault Foundation’s Modern Art collection in Venice’s Gritti Palace.”

Congrats to Salma!Â  The only, and I mean only, problem that I have with this pairing is that fact that beautiful Salma is marrying a wrinkly old geaezer!Â Â  What gives with that?Â  I guess FranÃ§ois-Henri kinda has the whole James Bond thing going for him, right?