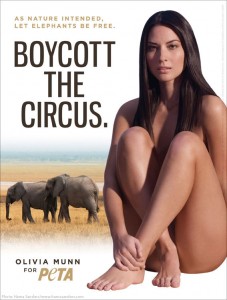 The newest celebrity to shed her clothes for PETA (People for The Ethical Treatment of Animals) is Olivia Munn. Yes, she’s that hot chick who hosts G4’s Attack of the Show. She may come off as a sarcastic comic on the show, but Olivia also has a soft spot for animals.

According to PETA, Olivia “was shocked to learn that elephants used in circuses are torn from their mothers at birth and bound and electro-shocked as babies in order to break their spirits. They spend the rest of their lives performing silly, meaningless tricks out of constant fear of physical punishment, including beatings with bullhooks—sharp, metal-tipped implements that resemble fireplace pokers.”

She decided to put her celebrity status to good use by posing for PETA’s “Boycott the Circus” poster. “When you look at something like the circus and everyone’s laughing and there’s color and there’s music and everything seems so great,” Olivia explained. “But when you go right behind that door and they’re in these crates all day long and then they’re getting shocked and beat just so they can get up and dance around on a ball … it was just so sickening.”

What do you think about Olivia’s poster? Would you support her cause?