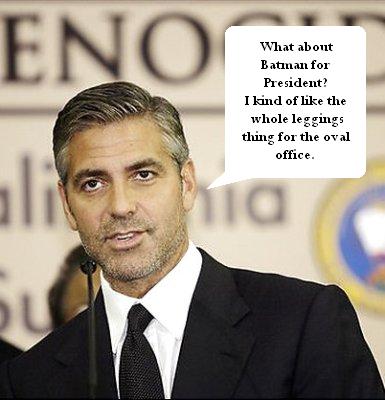 Although he is an outspoken advocate for human rights & has tried to draw attention to the suffering in Darfur, George Timothy Clooney will not be running for president.Â  And it’s a damn shame, it’s about time that we had a handsome individual running this place.

“Believe me, you don’t want me in politics,” 45-year-old Clooney told reporters Monday at an event whereÂ Governor Arnold Schwarzenegger was signing legislation to help stop the atrocities in Darfur.

When asked if he would run for the presidential office Clooney stated, “That’s a bad idea.”

Regarding Clooney &Â Schwarzenegger’s current career paths, Clooney offered some wit, “He’s gone on to be governor, and I still think I’m Batman.”Â  Clooney & the California governor played opposite in the 1997 movie Batman & Robin.Â