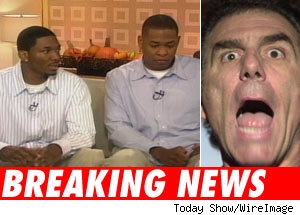 57-year-old Michael Richards has been a naughty boy &Â I’m thinking that he didn’t make Santa’sÂ list this year.Â  The formerÂ Seinfeld starÂ has been caught up in a hurricane of controversyÂ after TMZ released a video of theÂ comedian throwing out racial slurs at African American menÂ whileÂ doing his stand-up routine recently.

But is looks like the bad old boy isÂ now ready (2 weeks later)Â to apologize to the twoÂ men he strongly offended with his act atÂ the Laugh FactoryÂ Comedy Club in Los Angeles.Â

“Michael Richards would like to apologize in person to the gentleman with whom he had the exchange in the club. After discussions with Gloria Allred, an attorney who represents the man and three others who were with him that night, Michael has agreed that they will all meet in the presence of a retired judge who will facilitate the meeting and help the parties resolve this matter. All concerned are hopeful that a face-to-face meeting will be constructive and begin the necessary process of healing and closure.”

So, what do you think- Is this apology enough for Richards’ racial slurring?Â