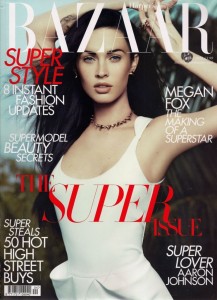 The UK edition of Harper’s Bazaar has Megan Fox on its April issue. If her sultry eyes and figure aren’t enough to make you buy the magazine, then maybe the interview on her sex life and self-awareness will make you change your mind. Here are some quotes:

I’ve only been with two men my entire life—my childhood sweetheart and Brian. I can never have sex with someone that I don’t love, ever. The idea makes me sick. I’ve never even come close to having a one-night stand.

My body parts are all I have left now that are only mine—the world owns everything else.

My biggest regret is that I’ve assisted the media in making me into a cartoon character. I don’t regret what has happened to me, but I regret the way I have dealt with it.

Harper’s Bazaar (April 2010, UK) is out in newsstands this week. Go get your copy now!