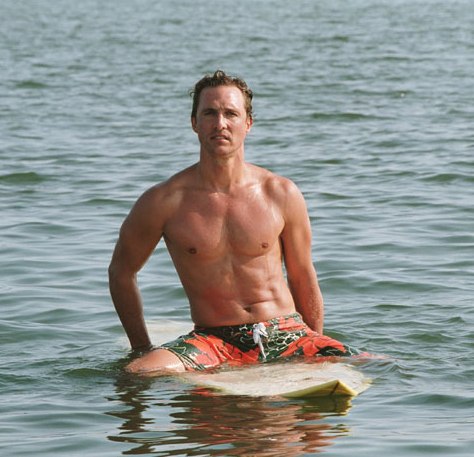 Matthew McConaughey apparently hates shirts & loves his chest.Â  No big surprise there, since we only ever see him with just his shorts on.Â

But really, when have you ever seen a Matthew McConaughey movie where he did not take off his shirt.Â  How to Lose A Guy in 10 Days, Sahara, Reign of Fire & Edtv all had the McConaughey topless.Â  And really, who’s complaining?

According to an insider these shirtless scenes are no mistakes, and actually planned.

The source states, â€œAnd trust me, he makes sure that scene stays in every movie,â€ the insider says. â€œHe knows thatâ€™s where his strength is. Heâ€™s not the best actor, and without that body heâ€™s not the best-looking, either.â€

That Matthew McConaughey, he’s such a planner.