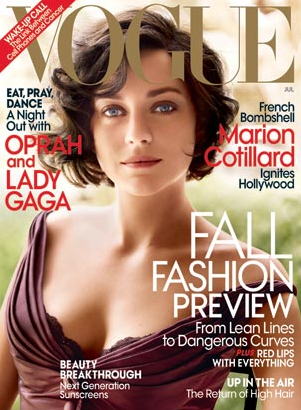 Marion Cotillard hits the cover of Vogue this month and beyond the front page she offers us a graceful, elegant shoot.

Cotillard’s spread was photographed by Mario Testino and apepars in the magazine’s “Fall Fashion Preview” issue.

Vogue also features an interview with the Academy Award winning actress in which she talks about her role as French chanteuse  Edith Piaf in ‘La Vie en Rose.’

After the movie was complete, she fled to the Amazon for vacation. “It was there that I found myself articulating why Piaf was still living inside me. She had been abandoned as a child; her greatest fear was to be alone. Now I didn’t want to abandon her. I finally was able to say, ‘She’s been dead for 40 years; it’s OK.'”

Even if you don’t read the interview, the photos are worth a closer look.