.
You are here: Home / Celebrities / Lindsay Lohan Stuck in Europe, Headed for Jail? 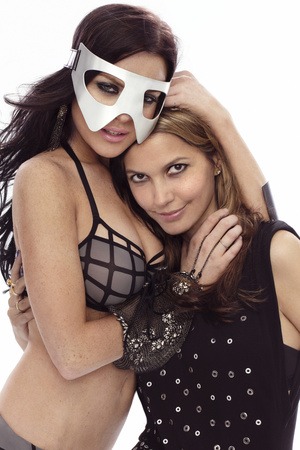 Yay, my favorite freckle-faced former redhead, Lindsay Lohan, always finds away to stay in the news so no one will forget her. She now has a 36 year-old “cougar” lesbian lover, as PopEater puts it, who is a photog and what’s her name, Indrani Pal-Chaudhuri, suggests she’s East Indian. Given LiLo’s facial features have been transforming into something very Bollywood, I’m not surprised.

But wait, is LiLo’s new pal, Pal-Chaudhuri, paparazzi? No, she’s a reality show star, a Princeton graduate, and not a party girl. So what happened to the man whose arm she was on about Cannes? But LiLo told US Weekly that while the two have been spending time together, they are not dating. But Indrani’s own business partner, photographer Markus Klinko, is quoted as saying he’s seen the pair making out.

So why does LiLo’s lawyer think she’s going to jail? Well Lindsay was right, that she needs a few more weeks to complete her probation terms. She’s also supposed to finish up the last 4 classes of her traffic school cum alcohol education by Thursday. (Looks like she was educating herself about alcohol in Cannes, though, judge.) Unfortunately, because of the volcanic ash that’s still affecting airports in Europe, she might not make it back tin time, in which case she’ll have a bench warrant for her arrest waiting to greet her in the USA, whereupon she’d probably be ushered to a cell.