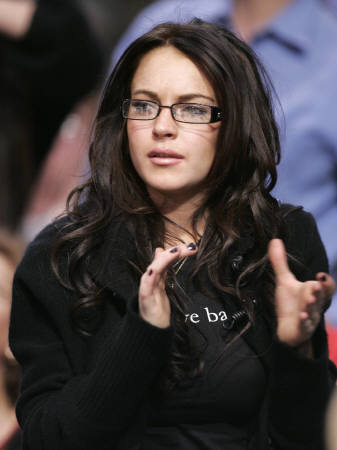 Lindsay made a statement through her rep, saying, “I have made a proactive decision to take care of my personal health.Â  I appreciate your well-wishes and ask that you please respect my privacy at this time.”

Lohan arrived at Wonderland in a tinted SUV followed by two other darkened cars.Â  Lohan was dressed in her signature black tights, a green flannel shirt, leather jacket & a baseball cap that read “Lola”.Â  She brought into the center her favorite Balenciaga bag and a Jamba Juice.Â  Well, sounds like she’s prepared for the trenches with that Jamba Juice!

What lead to this sudden flight to rehab?Â  Although LL didn’t actually attend the Golden Globe Awards dinner, Lindsay arrived at Prince’s after-party at the Beverly Wilshire Hotel where she partied until 6am Tuesday morning.Â  An onlooker revealed that the singer/actress was partying strong & that “she was totally out of it.”

Wishing LL well in this new step towards a healthier Lindsay Lohan.

You tell me- Should Lindsay have entered rehab a bit earlier?Â  Way to start of the New Year, eh?