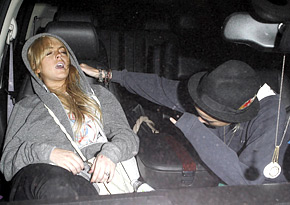 Teen queen Lindsay Lohan has checked into rehab once again.Â  Lohan was actually driven to Promises Rehab Center in Malibu on Monday afternoon by herÂ attorney Blair Berk around 4:30pm.Â

A rep for Lohan stated, “Lindsay admitted herself to an intensive medical rehabilitation facility on Memorial Day. Because this is a medical matter, it is our hope that the press will appreciate the seriousness of the situation and respect the privacy of Lindsay as well as the other patients receiving treatment at the facility. There will be no other official comments regarding this issue.”

According to sources, Lindsay will be receiving some “serious medical treatment” compared to the plush treatment she enjoyed during her short stint at Wonderland last January.

This rehab visit comes on the heels of a wild Memorial Day weekend for Lohan where the actress did her fair share of partying & playing dead.

Maybe this go-round will wake ole Lindsay up & she can start realizing it’s not the 80s anymore.