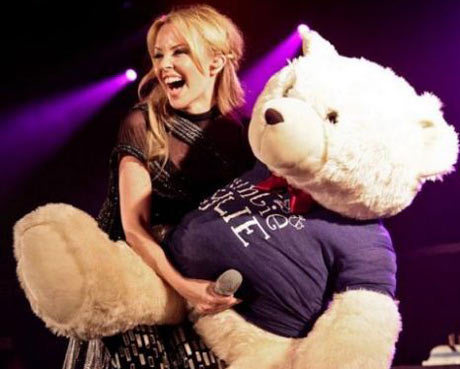 So get this, singer Kylie Minogue put a photo of herself holding a giant teddy bear and a microphone on her Facebook page and the social networking site removed it!

Okay, so maybe the microphone is in an oddly placed spot (look at the photo and you’ll notice what I mean immediately), but calling the photo too racy for the site when I see bent over girls in thongs that remain in place, seems a little over the top.

“We do not allow photos that contain nudity, drug use or violence.”

Which really doesn’t explain why the photo was pulled since it doesn’t contain any of the above mentioned stipulations for photos.

The teddy bear was given to Minogue by a fan while she was performing at the famous “G-A-Y” Nightclub in London.

Have you had any seamlessly innocent photos pulled? If you have let us know about them in our comments section.