.
You are here: Home / Mischief & Mayhem / Kiefer Sutherland is a Prankster & a Drunk 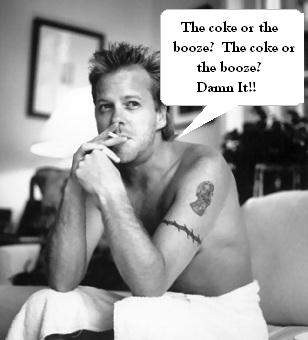 After learning of a college drinking game related to the show 24, Kiefer Sutherland is making students everywhere call the shots.Â  Apparently there’s a drinking game peaking up its head in college towns, every time you hear Sutherland’s character Jack Bauer say, “Damn it!”, you down your shot.Â  But now that Kiefer knows about this little game, you had better watch out.

Sutherland reveals that once he heard about the “Damn It!” game he said it as many times as he could, including one episode of 24 where he said it three times in succession.

What a prankster, that Kiefer is.Â  Sutherland has a bit of a problem with drinking himself, I guess after putting down the coke, you better have a backup.Â  He says he drinks to unwind, but with the occasional blackout and loss of memory he understands this is not a “clever” way to live.

“It’s selfish and self-absorbed and it’s a dangerous thing, thinking that if you work really hard, you should be able to reward yourself by going out and getting s**tfaced.Â  I should be able to wake up in the morning without going, ‘Oh no!Â  Where’s my boot?’Â or ‘Where am I?'”

Too true.Â  But come on,Â when did actors start working really hard?

“It’s not a very clever way to live,” Sutherland went on to state.Â  “And I don’t want to live like that, but it’s the kind of trade you have to make.”