.
You are here: Home / Celeb news / John Legend Just One of the Many Famous Celebs to Visit Niagara Falls

When platinum recording artist John Legend and his wife, Chrissy Teigen, recently took in Niagara Falls and the surrounding attractions, he became just another name on the long list of star-studded visitors to the world-renowned tourist destination.

According to Niagara Parks Commission chairwoman, Janice Thompson, the nine-time Grammy Award winner and his wife enjoyed their time there. “He was here on a personal visit, just he and his wife,” she said. “He had been to Niagara Falls last month, but didn’t get to see the falls up close.” 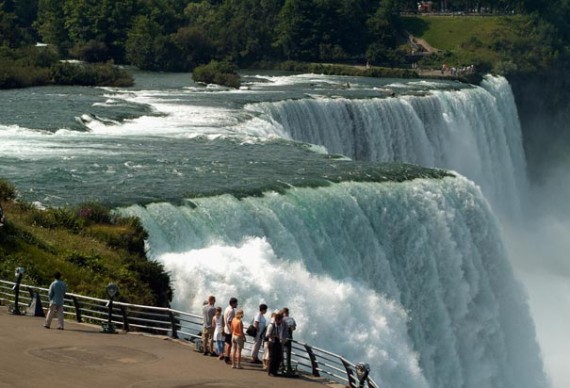 When asked about how many famous guests visit the falls each year, Tony Bladinelli, the man who coordinates celebrity and dignitary visits, said it can vary quite drastically. “Some years may be slow, some years may be quite busy.” And, much like the fluctuations in visitors, some choose to take it in from a distance, while others like to get up close and personal. Famous actor and comedian Adam Sandler is one of those, hopping onboard one of the boat cruises during his visit in 2014.

The Most Notable Niagara Falls Visitors

No offense to John Legend, Chrissy Teigen, or Adam Sandler, but they don’t even come close to topping the list of notable Niagara Falls visitors. Here’s the competition:

King George VI. In 1934, King George VI and his family took a voyage across the Atlantic for a royal tour – American-style. Among their many stops was a trip to the falls. Upon arriving, the King and Queen were welcomed at the steps of the Niagara Parks Commission administration building and given a grand greeting. They then toured the falls before heading to Washington D.C. to meet with President Roosevelt.

Marilyn Monroe. Part of the attraction to Niagara Falls is that it holds such a visible place in American history. One reason for this is that Marilyn Monroe chose to film her hit movie, “Niagara” on location at the falls. After that film, tourism to the area increased exponentially, as vacationers and movie production teams infiltrated the surrounding area.

Princess Diana and the royal family. Perhaps the most famous visit in recent decades was when Princess Diana, Prince William, and Prince Harry came to the falls in 1991. They participated in many of the attractions and thoroughly enjoyed their visit.

Mark Twain. A frequent visitor, Mark Twain was never shy about expressing his feelings regarding the beautiful falls. In his book, Sketches New and Old, he titled a chapter, “Niagara.” In it he wrote, “Niagara Falls is a most enjoyable place of resort. The hotels are excellent, and the prices not at all exorbitant. The opportunities for fishing are not surpassed in the country; in fact, they are not even equaled elsewhere.”

While these figures may be the most notable, the list doesn’t stop here by any means. Other names include Thomas Edison, Helen Keller, Shirley Temple, Elvis Presley, Winston Churchill, Oscar Wilde, and dozens of U.S presidents.

So, you never know. If you’re planning a trip to Niagara Falls this summer, keep your eyes open. You might just recognize the person in the wet raincoat next to you.