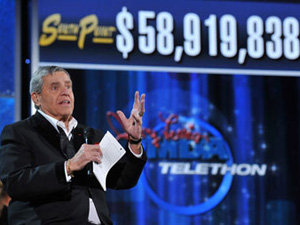 While numbers were slightly down for the Jerry Lewis MDA Telethon, the show still managed to raise $58.9 million, not a bad sum for a telethon that airs for just a few hours.  Last year the show raised $60.5 million, while 2008 saw donations of $65 million.

The show took place at the South Point Hotel in Las Vegas on Labor Day and was broadcast by more than 170 television stations to 40 million viewers. It was the telethons 45th showing.

Lewis said of the show:

“I’m heartened by the unique ability of Americans to help others in need, when they themselves are likely struggling financially,” adding “People see the progress MDA is making for children and adults living with muscle diseases. I’m truly grateful for their caring enough to brighten the future for ‘my kids.’”

Lewis, who is now 84 years old, finished off the show with his tradition song “You’ll Never Walk Alone.”