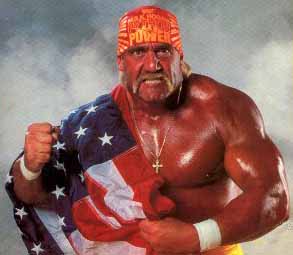 Hulk Hogan
once said that he had “the typical American family — just in a blown up way.” Maybe one too many slams jarred his sense of reality (or maybe he believed his PR spin too much) but after 24 years of marriage, his wife Linda has filed for divorce. They have 2 kids, Brooke (19) and Nick (17).

Her plans were reported by Fox Florida affiliate WTVT. Hulk was told later by a reporter. He hid his shock, thanking the man for the “great information,” put down the phone, then called him back 5 minutes later. “I’m kind of shocked. You caught me off-guard. I just pulled over to the side of the road for five minutes to find out what was going on here. Holy smokes. Wow, you just knocked the bottom out of me.” Apparently, his wife had been in California for nearly a month, apparently working on more than a tan.

In an interview three years ago, Hogan had described his relationship with his wife as “very passionate, very loving,” In terms of disciplining that “we’re kind of cool…but run a really tight ship.” Hmmm. Now his wife’s divorcing him, and recently, Nick was arrested for reckless driving (injuring the brain of his friend and passenger John Graziano). Reality check.