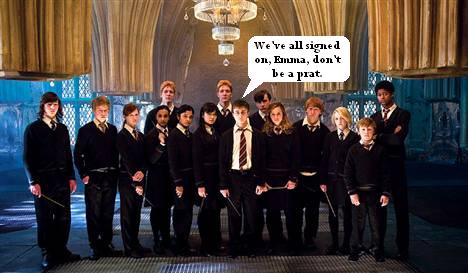 According to Newsweek we may have a problem, a Harry Potter problem.Â  Hermione Granger as we know her, may be lost to us.Â  Emma Watson who plays the intelligent witch in the Harry Potter movies may not sign up for the final two films.Â  Aghhhh!Â  Maybe she wants more time with that Corona?

Harry Potter and the Order of the Phoenix is currently filming in London and negotiations are already underway to secure Daniel Radcliffe (Harry Potter), Rupert Grint (Ron Weasley) and Emma Watson (Hermione Granger) for the final two films.

Watson is unsure, hesitant about committing more time to the Harry Potter project.Â  She tells Newsweek,Â “I don’t know yet.”

“Every film is such a huge production, and it’s a long time.”

If Ms. Watson does continue with the series, the now 16-year-old will be playing the part ofÂ Hermione Granger until she’s 20.

“Daniel and Rupert seem so sure.Â  I love to perform, but there are so many things I love doing.”

“Maybe that sounds ungrateful. I’ve been given such an amazing opportunity, but I’ll just have to go with the flow.”

Well, I can’t say that I don’t understand, but Emma, put down the Corona & come back to us!