Famous celebrities are not at all one dimensional people. As a matter of fact, most of them have gained their popularity because of their multi-dimensional personalities and skills. There are a whole lot of Hollywood personalities that also have a mild obsession with collecting fine art.

If you’re interested for interest’s sake in just who are a few of the top collectors in Hollywood, then you’ve come to the right place. Here is a quick summary of the top five Hollywood personalities who have been known to nurture a small fetish through collecting very expensive fine art pieces. If you’re interested in browsing fine art yourself, then you could check out what Park West Gallery has to offer. 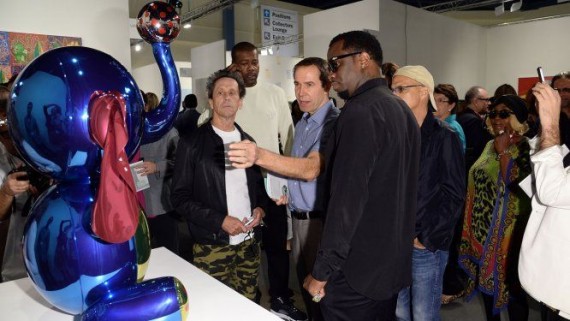 Mr. Combs has been sighted at several art galleries around the world making some very expensive purchases. He is clearly a person that actually seeks out certain pieces. In recent years, Sean Combs has probably spent over a quarter of a million on art alone. He also recently put one of his homes on the market, and has stated that the artwork will go along with the house. Maybe he needed a clean slate to begin the journey of decoration all over again…

Well known for his acting abilities, Leonardo DiCaprio is also quite well known for his taste for fine art. The actor hosted a fine art fundraiser, and raised over thirty eight million dollars in just a few hours through a friendly auctioning process. That money went straight to a wildlife charity, and he promptly turned around to buy more art. He reportedly purchased one piece worth seven hundred thousand dollars, and said that he “just couldn’t help” himself.

Music mogul Jay-Z has been an opened admirer of fine art for the length of his career. Even the lyrics of his songs refer to a couple of the paintings he owns. He has also shot a recent video that showcases the faces of several elites well-known in the art world. Jay-Z has stated openly his love for Andy Warhol’s art.

Not only has Elton John created a beautiful collection of music during the years he has been in the business, but he also has an eye for the finer things in visual arts. His passion is photography. He and his husband, David Furnish, have an amazing collection of photographs that center around portraits, famous individuals, and varying sorts of obscure fashion.

Madonna sports an art collection estimated to be worth around one hundred million dollars. No big deal. It’s just Madonna. A couple years ago, she sold one of her pieces for 7.2 million dollars, and gave the money to charity for girls education in Afghanistan and Pakistan. She has a piece by Salvador Dali, Pablo Picasso, and Fernand Leger.