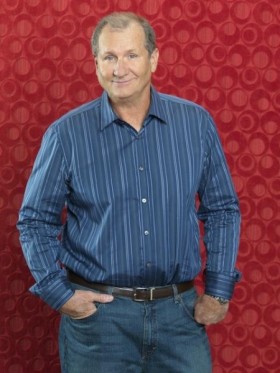 Darn, looks like TV Guide – Canada Edition can’t get their quotes right. The TV based magazine recently published an Ed O’Neil quote that appeared to attack Glee actress Jane Lynch, now Ed has went on the record to fix the misquote.

The magazine originally said Ed O’Neil believed Jane Lynch didn’t deserve her Emmy award for best supporting actress in a Comedy and that it should have gone to his Modern Family co-star Sofia Vergara. According to the TV Guide quote Ed said:

“I love Jane, honestly I do,” while adding, “I’m dying to star in one of [mocumentary director] Christopher Guest’s movies alongside her, but I don’t think she should have gotten the Emmy for that part. Sofia is just so, so funny,” he said. “I don’t think people realize how hilarious she is. She’s so sharp with her wit, it’s amazing.”

Here’s what he really said:

“I’m one of Jane Lynch’s biggest fans. I love Jane Lynch. She is a genius. But at the same time I said ‘Sophia could win’ because … and I’ve only seen Glee a couple of … I’ve only seen Glee once. But I thought Jane’s role is rather one-dimensional. It’s kind of strident. It’s always kind of the same. I’ve seen her be much better. So I thought ‘Sofia’s funnier,’ and I think she is in these two comparative roles. Anyway, Jane won. But I was hoping that Sophia would.”

Okay so it wasn’t fully nice to Jane, but her character is pretty one-dimensional and he did say he has loved her past roles.

Ed put out his own statement fixing the wrongs created by TV Guide Canada:

“Last week I spoke to a group of journalists and one quoted me supposedly saying of Jane Lynch, ‘I don’t think she should have gotten the Emmy for that part,’” Ed said. “I never said those words and transcripts of the press conference attest to that fact. Of course I root for my dear friends Sofia Vergara and Julie Bowen (and all of my colleagues on our show) at Emmy time, but I absolutely never said, nor do I believe that Jane — whom I think is an enormous talent — was undeserving of the award. I reached out to her yesterday to ensure she knew I’d been misquoted but I wanted to clear this up publicly as well.”