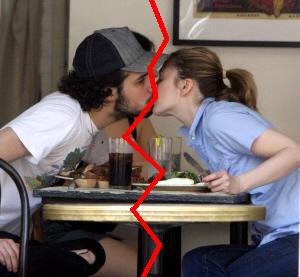 Well, it’s the end of an era, maybe.Â Â 31-year-old Drew Barrymore & 26-year-old Strokes drummer Fabrizio Moretti are calling it quits.Â  After dating for more than five years, the coupleÂ have decided to cool off for a bit.

Apparently Drew is the initiator in the relationship fizzle, wanting to have some space to think & work some things out in her head.Â

â€œFab is now living back in his old apartment,” a Fabrizio pal reveals.

But don’t count the two out for the count, as Barrymore has broken up with Fag two times before.Â  And in the February edition of Bazar, Drew couldn’t say enough about her subculture man.

â€œRight now Iâ€™m in a phase of â€˜Iâ€™m not even your girlfriend. Iâ€™m your best friend who is madly in love with you,â€™â€ Drew told the mag.

â€œThe longest Iâ€™ve ever been with someone was like two to three years, so Iâ€™m in uncharted waters. Right now Iâ€™m more into championing him as a human being than gushing love for him.â€

Well, it looks like the gush wore out & it’s back to just being friends.

YouÂ tell me- Do you think Drew Barrymore & Fabrizio Moretti will get back together?