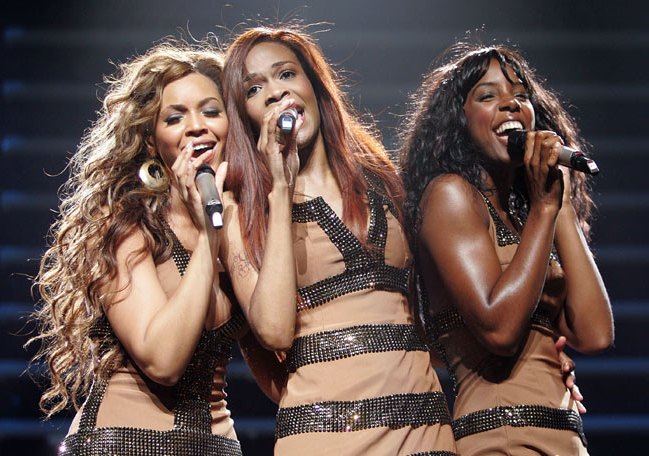 Well, it looks like the Beyonce troupe will never say goodbye. It all just feels so familiar, like the ’72 Bowie retirement announcement, or the Kiss goodbye, or even the Eagles, The Who and the all-time cakesniffer herself, Cher.

Last November Jimmy Kimmel dedicated an entire show, a first for the ABCer, to the purported adieu of Beyonce Knowles, Kelly Rowland & Michelle Williams. Now, three months after their exhaustedly promoted farewell performance, the eight-time Grammy winners are scheduled to reunite for yet another go round at the 2006 NBA All-Star game in Houston February 19.

While the trio have billed the show as its final adios, Rowland said a reunion would not be out of the question. “You never know,” said Rowland when asked if the group might re-team in the future. “I think the most beautiful thing is that we’re not parting because there were problems. We’re parting because we’re celebrating each other’s growth.”

As for the ladies, Knowles, who won middle-of-the road praise in Austin Powers, Goldmember, can be seen in theatres February 10 in the remake of The Pink Panther– keep your eyes open for GossipyGower’s review. Rowland has her second album due out at your local music store June 13, while Williams’ next Christian music project may be available this summer.

I’m absolutely certain that gaggling thousands will be tuned into TNT for the All-Star, long awaited reunion of Destiny’s Child. I, myself, can’t wait for the 2007 reunion, and all those following. Cheers.