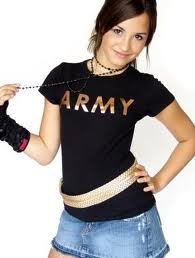 Disney star Demi Lovato turns 18 today, August 20th and MTV caught up with the Camp Rock and Camp Rock 2 star to talk about her birthday.

Lovato was asked what she would like for her special occasion and she had a simple request:

“‘I don’t know! Handbags?’ Like, I have everything I could want. I’m just thankful.”

Congrats to Lovato on reaching the age where she can legally vote, unfortunately for her she’ll probably have more weirdo’s coming out of the woodwork now that she’s officially “legal.”