Can you believe she’s turning 16 next month? While most Hollywood child stars make a difficult and troubled transition to teenhood or adulthood, Dakota has managed to do it gracefully.

She makes a stunning debut on one of the recent covers of V Magazine’s The Size Issue, where she dons Alexander Wang’s threads. The other cover features Gabby Sidibe, star of Precious. 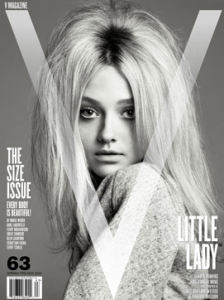 In the cover story, Dakota talks about family, school, and her non-showbiz life. She also talks about her role in the upcoming The Runaways, a coming-of-age true story about an all-girl rock band in the ’70s, where she co-stars with Twilight’s Kirsten Stewart.

I admire how Dakota has kept it together without succumbing to the rebellious druggie and partying lifestyle that most coming-of-age Hollywood stars go through (Hello Britney, Lindsay, and Miley!) As a kid, I always saw her as adult trapped in a kid’s body. She’s always had the mature yet adorable aura, which must’ve been why she was able to pull off those challenging roles.

What do you think about her V Magazine cover?