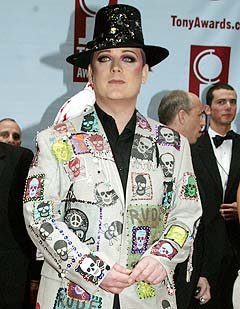 Being a celeb has its many dues- fame, fortune, being a perpetual guest on SNL and of course, all the chocolate you could ever want. But do you know what really gets me? What I would want most of all? The undeniable ability to get out of troublesome situations, aka- the ability to get out of shit. Hmmm, let’s name a few of these fortunate folks: the most impressive first, OJ; moving on to the new look of Stetson, Matthew McConaughey & we can’t leave out the always odd Dennis Rodman. An occasional brush with the law, always ending with, “Hey, aren’t you that Stetson guy?”.

Boy George, or as his mother knows him- George O’Dowd, was arrested last October when he falsely reported a robbery at his residence as well as having a small stash of cocaine next to his computer. The former Culture Club frontman arrived at a criminal court in Manhattan yesterday to answer to these charges. His defense- the robbery was real and the drugs did not belong to his person.

Wow! Can I try that someday? I’ll jack a car, smoke some hash, run a red light, get pulled over by the coppers and say, “I was forced to take this Lexus by mischievous aliens, this hash came with the car and I know that light was yellow when I cruised thru it.” And do you know what they would say, anxious reader? They would not say, aren’t you that GossipyGower that lightens our day with your verbal antics. I doubt they would say much at all, and neither would I during the beatings, feeling the cold stolen Lexus on my stomach as I’m cuffed and taken to jail, prosecuted by my peers and rushed to prison where I would spend my days just wishing I could have been an O’Dowd.

Boy George has been freed on bail pending a trial that has not yet been scheduled. I have to raise this extra hot almond latte to you, fine sir. May the bonds of incarceration never touch those fine & delicate features.