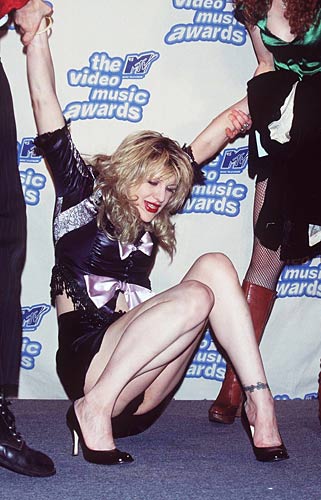 Wow.Â  That was one good prank Tuesday, I even fell for it.Â  Earlier this week Courtney Love revealed that she might be tinkering with the idea of becoming an American Idol judge &Â it was rumored thatÂ Love wouldÂ be replacing Paula Abdul on the hit talent show.Â  But it looks like the whole thing was a prank, which totally makes more sense, as we never really understood that Love would be more reliable than Abdul.

According to Love, Idol’s executive producer Nigel Lythgoe telephoned her Tuesday asking whether she would like to join the show’s judges.Â

Â â€œHe was wondering if I was interested. I thought it was kind of weird but brilliant.”

But on Wednesday Lythgoe revealed to Us Magazine that he never called & would never want Love as a judge, saying, “I did not call Courtney Love and am afraid someone may have misrepresented me. Courtney Love is a very talented artist, but the judges for American Idol are Paula, Randy and Simon. We have no plans to add to or replace any of them.”

So who would make such a call?Â  A source close to Love stated,Â “It was probably a prank.”

Well, duh.Â  If Nigel really didn’t call & Courtney thinks he did, it was probably that or some kind of heroin delusion.

You tell me- Would Courtney Love make a good American Idol judge?