.
You are here: Home / Birthdays / Courtney Love Looks Even Scarier On Her 43rd Birthday 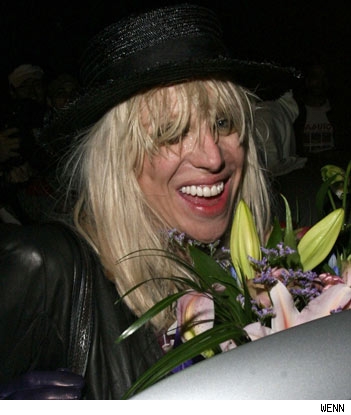 Someone other than blondie Jessica Simpson is celebrating their birthday this week, Courtney Love rung in herÂ 43rd birthdayÂ by apparently doing her best & scariest ’80s impression.

Love, who turned 43 on Monday, was spotted after her performance at London’s Bush Hall holding a bouquet given to her by an admiring fan.Â

I’ve been watching Love for almost a decade now, and I think this might just be the worst picture of Courtney ever.Â  I mean, the bird-like nose looks like it’s going to turn into a beak any minute now & those teeth look like they could use a good soaking since they look like my grandmom’s dentures.

Really Court, you need some kind of fashion intervention & freeking fast at that!