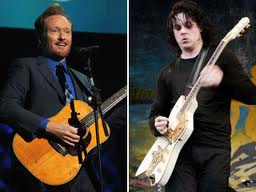 Soon to be TBS talk show host Conan O’Brien and Indie rocker Jack White of The White Stripes have teamed up to record a song about Frankenstein.

The song was recorded for White’s Third Man indie record label and is titled And They Call Me Mad? The song is an improvised spoken-word narrative about everyone’s favorite green monster.

According to the label, the world premiere of the entire recording will air on Monday, Aug. 23 (12 p.m. ET) on Sirius XM’s Raw Dog Comedy channel. According to PopEater, the spoken-word performance officially goes on sale the following day, but is available for pre-order now.