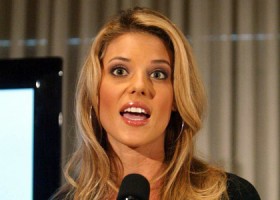 The couple were married at Capella chapel at Grand Del Mar Hotel, a location that holds up to 280 guests.

The couple met last July when Prejean, 23, was busy causing a stir with her discriminatory rants about same-sex marriage during the 2009 Miss USA pageant.

Here’s the stupid rant she gave to Perez Hilton:

“I think in my country, in my family, I think that I believe that a marriage should be between a man and a woman. No offense to anybody out there, but that’s how I was raised.”

In her country? Are we all just her minions? but that’s old news and she was stripped of her title by Donald Trump.

Prejean tried to sue the pageant until a bunch of sex tapes she had made were revealed…she then threatened to walk off a Larry King Live shoot and wrote a horrendous book (I dare you to get past the first few pages).

Good luck to the happy couple…and good luck to Boller until he finds someone a little less annoying.