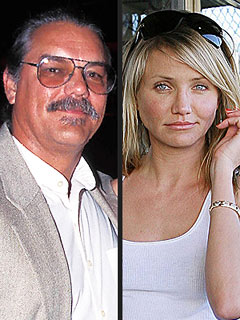 Our condolences to Cameron Diaz, whose father Emilio passed away Tuesday morning. His death had been unexpected, since he was only in his late fifties. However, a seemingly innocent flu escalated into pneumonia. Cameron has taken an indefinite leave from the movie she is filming,
My Sister’s Keeper.

Fans may remember Emilio’s cameo appearance in There’s Something about Mary.