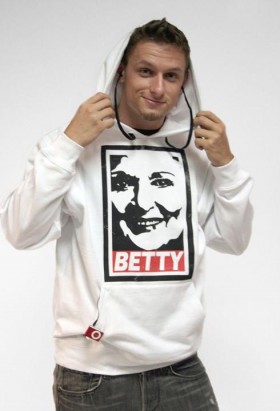 It’s official, the 88-year-old Betty White is the hottest name in entertainment at the moment and she’s using that name to promote an upcoming clothing line. Known as “Fashions by Betty” the line includes t-shirts and sweatshirts.

According to Women’s Wear Daily:

“With Betty White’s star continuing to be on the rise, she was a natural fit for Jerry Leigh Apparel, as we pride ourselves on offering the most cutting edge developments in the apparel industry,” says Andrew Leigh, president of Jerry Leigh. “With Betty dedicated to her philanthropic efforts with the Morris Animal Foundation, we knew this venture would be a good fit and it would appeal to the general public and Betty White’s extensive fan base.”

T-Shirts from the line are $28 and Sweathshirts will run $48 and come with an iPod and Mp3 player capable plug-in unit, while still remaining washer/dryer safe.

The best part? a part of each sale will benefit the Morris Animal Foundation.

The clothing line arrives in August at various retailers.