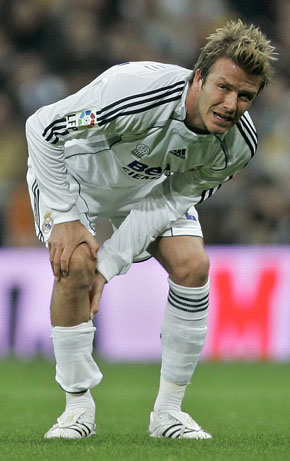 Oops, well there goes an American career.Â  Soccer (football) legend David Beckham suffered a serious injury to his kneeÂ at a match on Sunday when the Real MadridÂ midfielder collided withÂ an advertisement sign.

Beckham, who recently signed a $250 million contract with the Los Angeles Galaxy was hurt when he ran into a signÂ while playing a soccer game at home againstÂ Getafe.

The 31-year-old star tried to continue to play after the incident, but soon limped off the field much to the chagrin of his fans.Â  Apparently you should never bend it like Beckham, as David was diagnosed with damaging the “lateral internal ligament of his right leg”Â & will be undergoingÂ further testsÂ later this weekÂ to determine the extent of his injury.

“It looks serious but I do not want to say how bad until the doctors do the scan,” said Real Madrid Coach Fabio Capello.

Hmmm, maybe Capello is just a little vindictive since Beckham left Real Madrid before his contract was really over, I wonder if some accidentally may have placed that sign there for David to run in to, an maybe some Vaseline on the field to ensure that ole Beckham would never play soccer again.Â  Ahhh, conspiracy theories, don’t you love ’em?

Well, it looks like the Los Angeles Galaxy may have just paid top dollar for a benchwarmer.Â  What do you think?