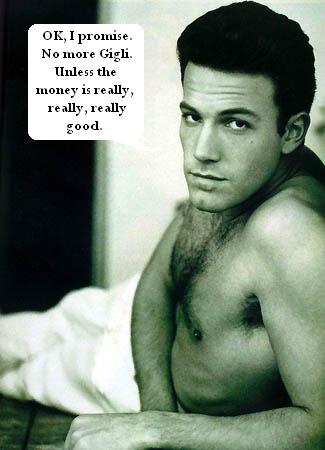 34-year-old Ben Affleck was just as surprised as we were at winning Best Actor award for his portrayal of TV Superman George Reeves in Hollywoodland.

Affleck left the Venice Film Festival early, trying to beat the traffic & not expecting any awards.

He states, “If I thought for a second that there were going to be awards for anybody, I would have stayed!”

Ben even goes so far to try and convince us to overlook Gigli.

“I’ve been in movies that earned a lot of money that… I wish I wasn’t in honestly. I was a little cavalier before, but having a child makes me think about things differently.

“I have to prove myself all over again, but I don’t mind that. Once I realized where things were going, I just said, ‘OK, let me make sure I’m in a place where I don’t have to worry about being on “Family Feud” for dough in five years and then I’ll just do what I can be proud of.'”

Affleck said that he reexamined his life after his daughter with wife Jennifer Garner was born last December.

“The only thing that matters to me is my daughter being able to be proud of her old man.”

I can live with that.Â  Just no more Gigli, dammit!