.
You are here: Home / Mischief & Mayhem / Anna Nicole Tries To Keep Her Clothes On In Court 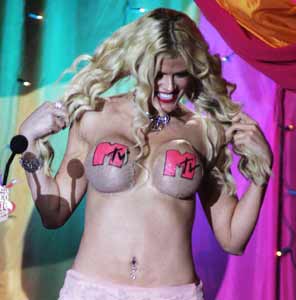 Ahhh, Anna Nicole Smith– media epiphyte, scary reality show star, 32DD exposer and ditzÂ extraordinaire is heading off to the Supreme Court today where she can meet & greet her former clients.Â  Hah!Â  Who wants to place bets on how long she can keep her dress above the floor?

No, the Court is to rule on whether Smith can retire from her day job as a weight-loss promoter and keep the fortune her former husband left her.

Former Playboy playmate Anna Nicole Smith married oil tycoon J. Howard Marshall II, 89, in 1994 while she was a 26-year-oldÂ topless dancer in Texas.Â  You know if you’reÂ a topless dancer and want to marry old men and inherit their fortunes, Texas does seem like a good place to be.Â

Marshall died the following year of their marriage and Smith contended that she was promised half his fortune, valued at $1.6 Billion.Â  During their short marriage Marshall showered Smith with $6.6 million in gifts that included two homes, $2.8 million in jewelry & $700,000 in clothes.Â

Pierce Marshall, the wiley son of the late J. Howard Marshall II, states that various wills and trusts made him theÂ sole heir.Â  But in 2002 a federal court ruled that Smith was entitled to compensatory and punitive damages because Pierce Marshall altered, destroyed and falsified documents to try and keep her dirty little hands off his father’s money.Â  That decision was thrown out and more money taken from the courts to push this ridiculous case toward the Supreme Court.

Cristall Klujian, a former stripper who now works as a full-time golddigger stated this morning, “To the outside world, being a golddigger may seem like easy money.Â  I can tell you, as someone who has gone on vacations with wealthy boyfriends and laughed at their lame jokes, this is hard work.”

I see…. You know, that is hilarious on so many levels.Â  I don’t know about you, but I have to laugh at lame jokes at my work, with my family and my dog just doesn’t have the comedy routine down yet.Â  AndÂ I survive this, though mildly harmed.Â Wow.Â  All I can say is, that I’m a little perplexed with the world embracing a NAGG, but good work with the acronym.

So let’s keep our fingers crossed today, as Anna Nicole tries to keep her legs doing the same,Â not only forÂ fortunes given to golddiggers, but to NAGG’s everywhere.