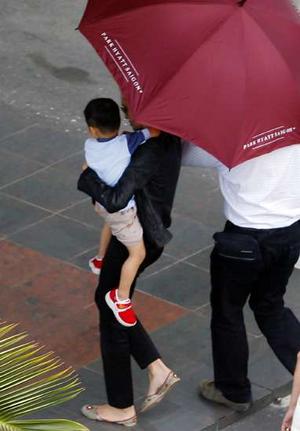 Angelina Jolie & her newly adopted Vietnamese son Pax barely escaped a kidnapping plot recently.Â  This is actually not the first brush with plot for Jolie, who has been threatened many times in the past.

According to Life & Style, there was a kidnapping plan to snatch her son Pax when they arrived back in the United States.Â  The kidnappers were planning on demanding a paltry $100 million for the safe return for the boy.Â  PerezHilton, was this your idea?

The plot was to be carried out by a group of men who apparently pride themselves on their kidnapping expertise.Â  An insider reveals, “They’re highly skilled operatives with little regard for human life.”

And though Angelina & partner Brad Pitt have had a series of threats, this particular one is being calledÂ “credible and serious”.

Meanwhile, Pitt has installed a $500,000 security system in their New Orleans home which is actually just a block from the city’s police department.

Keep those babies close, Ang!Â  Perez can be a bit of a commiter!