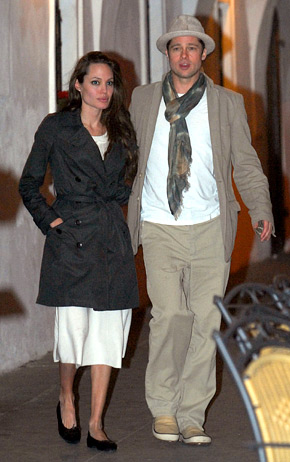 Reunited, and it feels so good!Â  Just five days after AngelinaÂ Jolie was spotted getting it on with ex-beauÂ Olivier MartinezÂ while partner Brad Pitt was in L.A. with the kids, the hot Hollywood couple have reunited in Prague, Czech Republic.

Brangelina arrived at the Prague airport Tuesday night, with the four kiddies in tow.Â  After a quick onboard passport check, the family & several bodyguards climbed into an awaiting silver MercedesÂ & away they went to their rented home.Â  Pitt, who seems to have a fedora glued to his head these days, sat in the passenger seat & enjoyed a window-down breeze.

On Wednesday, Jolie arrived at the movie studio where she will be spending the next month doing scenes for her lastest & greatest pictures, Wanted.Â

According to an insider,Â Ang has requested to only work during the day, saying, “Angelina put in a request with us to only work on the movie during the day. She stressed how important it was for her to be with Brad and the kids in the evenings as she didn’t want their days to be messed up.â€

“Naturally, her demand was met and she is now only scheduled to film during the day.”

Ahhhh… how nice to make demands & have them met.Â  It’s like having your proverbial cake & eating it too!