.
You are here: Home / Celebrities / Angelina and 9 Other Hot Celebs Who Ski and Snowboard 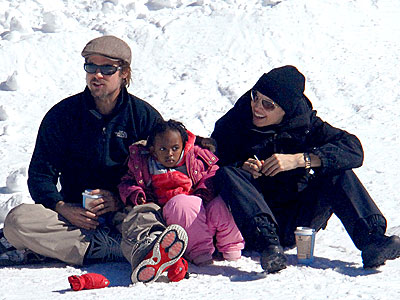 But last winter, the 48-year-old actor was said to have wiped out on a ski slope just prior to attending the Palm Springs International Film Festival Awards Gala in California. It was there he was photographed walking the red carpet with a cane. Post event, It took a while before his torn collateral ligament healed.

Here are nine other celebs who have been a little more fortunate in escaping injury on their boards and skis.

Before the Glee star Corey Monteith sadly passed away last year, the Canadian-born actor was known to enjoy some winter extreme sports, and was often spotted snowboarding in Vancouver, BC. Several celeb tabloids photographed him getting serious air on Cyprus Mountain in December 2011.

Last year, Gwen Stefani helped her son Kingston down the “bunny hill” in Deer Valley, Utah. It was apparently the little tyke’s first go on the slopes, but downtime for Gwen, who was entertaining with her husband Gavin Rossdale during the Deer Valley Celebrity Skifest.

British actor Simon Pegg, best known for Shaun of the Dead, often tweets about his adventures in exotic destinations — one of which was the Ski Dubai Resort. Inside the Mall of the Emirates, that particular resort gave him the opportunity to try out snowboarding in the desert.

During 2010 Olympic Winter Games, Whistler was as popular for its nightlife as its 7,000 acres of skiing terrain. Paris Hilton and her former boy-toy, Doug Reinhardt, took advantage of the skiing, snowboarding, and sledding during a snow-filled vacation in 2009.

Telluride is a favorite playground of the rich and famous, perhaps because of its remote location. Before their split, Tom Cruise and Katie Holmes were known to head for those hills often.

Prince Charles was known to take his sons William and Harry skiing at the Klosters in Switzerland. It was Kate Middleton’s presence on one of those royal skiing trips in March 2005 that sparked the relationship between her and William.

For the last three decades, Park City has been crowded with celebs, agents, and film executives around the time of the annual Sundance Film Festival. While not all of these celebs take to the slopes during their time in Park City, those who have been spotted skiing included actress Katherine Heigl of Grey’s Anatomy fame.

The slopes are not just a place to be seen; they also offer a romantic getaway for some celebs. Young Hollywood royalty Justin Timberlake & Jessica Biel got engaged on a snowboarding vacation to Wyoming in December 2011.

Is snowboarding for YOU?

If you love snowboarding, Vertical Urge is both a brick-and-mortar store and an e-commerce site where you can purchase snowboard products. They pride themselves in their ability to provide a personal shopping experience, even for their online customers.

See you on the slopes!