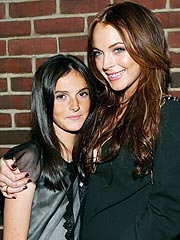 Ali Lohan has just accepted her first movie role in Mostly Ghostly (based on the popular book series). The fourteen year old says she “grew up” watching sister Lindsay Lohan on the set. “It made me want to do what she does. Just the whole vibe. Being there, being on camera, or onstage.”

Must be a big trend — Connor Cruise is also following his parents’ footsteps. Uhm, who’s next. Paris Hilton’s brother?