.
You are here: Home / Celebrities / Heath Ledger / Jake is Choked Up 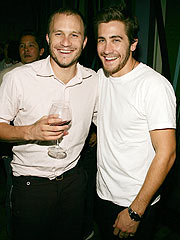