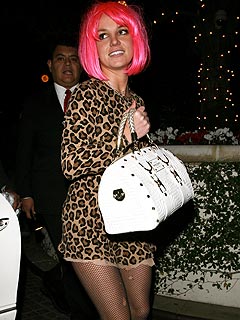 Could it be the influence of boyfriend Adnan, who originally hails from London, or another sign of mental instability?

She’s been taped doing the twang for the last 2 weeks, using it even when she’s swearing at reporters. “Get out of my G—— face!”

What would the Queen say?!

Psychologists say it’s a sign of dissociative identity disorder (i.e., multiple personalities), especially since she’s taken to other bizarre props — like wearing a pink wig. Others think it’s just a bid for attention.

“When she puts on the pink wig, you just know something crazy is about to happen,” said one paparazzo.