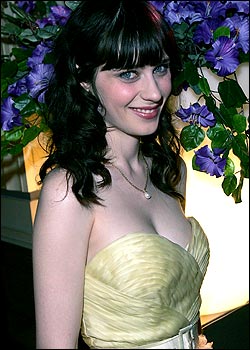 Zooey Deschanel has beat out the likes of Britney Spears, Lindsay Lohan & Scarlett Johansson for the coveted role of Janis Joplin.Â  The upcoming biopic of the singer has been on the table for a while with just about everybody vying for the part.

Punk singer Pink wasÂ originally slotted to play the late Joplin, but pulled out of the film when the film’s producers turned the casting process into “some circus pop contest–who’s the ‘it’ girl who wants to play Janis.”

But the Almost Famous beauty, 24-year-oldÂ Zooey Deschanel, has signed up for the task in the movie upcoming film,Â The Gospel According to Janis, which starts filming in Philadelphia in November.

You know, I have to say I’m thinking that a Hollywood beauty is probably not the right casting for the role of Janis Joplin.Â  Kinda chunky, not so cute & died of a heroin & alcohol overdose in a Hollywood hotel room doesn’t sound so much like a Scarlett role.Â Â  Though Britney on the other hand, well that might be a different story…