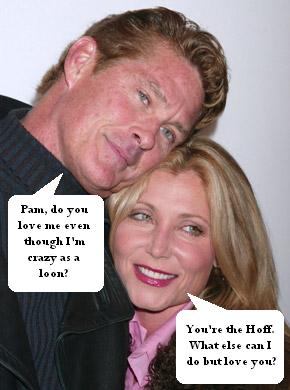 Ummm, place this story under weird with the subheading weird, under the title weird.

According to David Hasselhoff’s ex-wife Pamela Bach, the former Baywatch star lied to the police when he called 911 to report that his young daughter Hayley had tried to commit suicide.Â  WTF?

David made a 911 call Sunday night stating that Hayley had “cut herself”.Â  Now her motherÂ has revealed that the young HasselhoffÂ never tried to kill herself, it wasÂ just a spite call to the police by David to make Pamela look like aÂ bad parent.Â  My god, have we not graduated fromÂ high school theatricsÂ yet?
Â
BachÂ stated thatÂ 14-year-old Hayley was scratched by the family feline SundayÂ evening at 6pm.Â Â Hayley began to cryÂ uncontrollably which prompted Bach to call David and suggest they take their daughter to see a psychologistÂ on Monday.Â  At that point, David threatened to call the law on her.
Â
“You’re going down,â€ he allegedly told Bach. â€œI’m calling the police.”

The copsÂ & paramedics arrived on the scene and took Hayley to the hospital, where she was released almost immediately.

As of right now:Â Â Hasselhoff deniesÂ telling a 911 operatorÂ there was a suicide attemptÂ as well asÂ ever talking with Bach onÂ Sunday evening.Â  The Hoff, on his way to a film festival, left town without visiting his daughter.Â  What a great parent.
Â
And what a waste of taxpayer monies.Â  Sheesh!