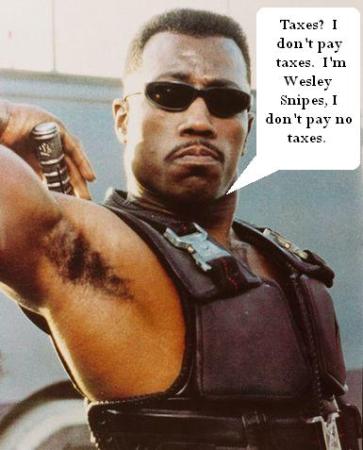 Why on earthÂ do stars think they canÂ get by with cheating on their taxes?Â  Will they ever learn?

Wesley Snipes was indicted today on eight counts of tax fraud.Â  The U.S. government is accusing Snipes of trying to cheat them out of $12 million in fraudulent refund claims.Â 44-year-old dumbass Snipes also failed (oops!) to file his tax returns over the past six years.

According to the federal indictment, Snipes acquired the services of an accountant who has a history of filing false returns, double oops.

Snipes, if convicted, may face up to 16 years in prison, triple slam-dunk oops.Â  Wesley, according to authorities, has not been arrested because no one knows where he is.Â  Tried Cuba, guys?

Interestingly, Snipes was denied entry into South Africa in 2005 when officials said he tried to enter the country with a forged passport.

What a stupid dumbass.Â  Snipes should have been overjoyed with the Blade movies and the fact that someone actually hired him as an actor and straightened up his damn life.Â  What a putz.