.
You are here: Home / Celebrific Sighting Pictures / Victoria Posh Beckham is a Meaniepants 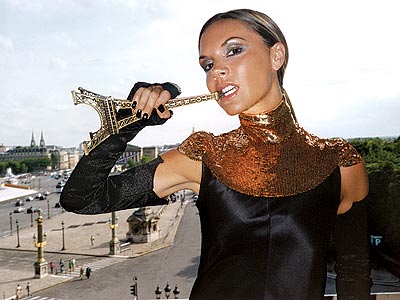 Well, it looks like the truth has finally come out, Victoria Posh Beckham is one big meanie.Â  According to an NBC insider, she is arrogant & very difficult to work with.

As NBC chronicles David & wife Victoria Beckham’s move from the UK to the US, the network is finding out what a grade A bitch the woman really is.

Here’s the insider now, “We think she’s full of herself and not very nice. She’s very picky, demanding and rude. And she was mean to the assistants, too.

“She waltzes around with her icy attitude. People will walk up to her and say, ‘Welcome to America’, or, ‘Good luck with the move’, and she doesn’t even stop to talk to them.

“The show is designed to make her a star in the States, but she’s dreaming if she thinks that’s going to happen. She’s coming off as a grade-A bitch!’ It is also alleged the show’s nervous producers are worried the series will be boring and a major flop.

“No one knows what to do with her to make the show interesting – she’s so boring! Every suggestion the producers make, she rejects.”

Okay, so I have an idea for the show.Â  Have someone confront her about her bitchy ways & see how she reacts.Â  Then schedule sessions with a bitch counselor.Â  I think it may just work.Â  What do you think?