.
You are here: Home / Celebrities / US Patent And Trademark Office Denies “The Situation” Trademark Request 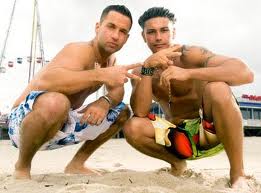 Mike “The Situation” Sorrentino may be a household name among reality TV fans and sure he’s one of the highest paid reality TV stars of all time, with earnings expected to top $5 million by the end of 2010, but apparently his “The Situation” nickname mixed with his fame wasn’t enough for him to be granted a trademark on his popular name.

The US Patent and Trademark Office (USPTO) rejected Mike’s request for “The Situation” name. According to TheSmokingGun.com Sorrentino hoped to trademark the name and then release a T-Shirt line.

According to USPTO, a trademark that was too similar to his own was issued to a Memphis-based clothing and shoe line in 2009.

Sorrentino’s lawyers contested the trademark offices decision, but a USPTO lawyer stood behind their final decision.

Mike isn’t the first Jersey Shore person to be denied a trademark on their name, Snooki applied for her own but was denied due to similarities with a children’s book called Adventures Of Snooky.