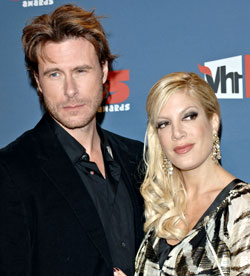 I’m not sure which is more exciting- David Blaine ending his stint underwater today or the fact that So NoTORIous Tori Spelling is a married woman, again.

People reports that the former Beverly Hills, 90210 alum tied the marital knot with Canadian actor Dean McDermottÂ on a private island inÂ Fiji yesterday.Â  The couple were the only attendees and both wore white and went barefoot, stark contrast with Spelling’s multi-million dollarÂ trip down the isleÂ to Charlie Shanian.

Groom McDermott stated his love for Tori saying, “I’ve never had as much of a desire to get married and make a woman my wife as I’ve had with her.Â  The feeling is overwhelming. We’re soul mates.”

The newlyweds met on the set ofÂ TV movie Mind Over Murder lastÂ year & got engagedÂ inÂ December.Â  Notice the ink was dry on both of their divorces just this year, and they had already proposed.Â  That’s an interesting approach.

“We’re so incredibly happy and in love. We cannot wait to start our lives together,” the couple said in a joint statement.

Dean McDermott has permanently expressed his devotion to Spelling through a tattoo on his wrist that readÂ “Truly, Madly, Deeply, Tori,” while his shoulder features a portrait of the actress.Â  How cute.Â  So, does the truly, madly go back to the movie with Juliet Stevenson or the Savage Garden song?

Both Tori & DeanÂ haveÂ claimed their respective splits had nothing to do with either spouses, McDermott’s ex-wife MaryÂ Jo EustaceÂ isn’t buying it.Â  She is already shopping for a book deal with the possible name of My Husband Left Me for Tori Spelling.Â  I’d have to say that it is a fitting title.

In her book proposal, Eustace ridicules her husband of 12 years for leaving her just months after they adopted a baby girl.Â  She also reveals that at the time McDemottÂ gotÂ tattoo Tori-fied, he didn’tÂ haveÂ enough money to pay for his electric bill.Â  Well, when all else fails- run to DaddyÂ Aaron Spelling for money, right?Â

Wishing the merry newlyweds bliss & betting on a two-year marriage at most.