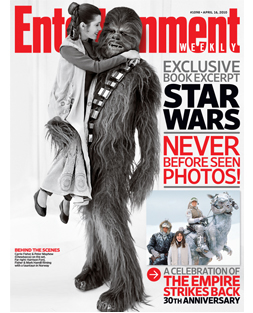 If not, then you’d be happy to know that the limited edition issue celebrates 30 years of the first Star Wars sequel by publishing never-before-seen photos and an excerpt from the upcoming Star Wars: The Making of The Empire Strikes Back book!

Lucasfilm and Del Rey are releasing the new book in October, and think of EW’s latest issue as the appetizer. Get this: it features quotes from the cast crew of Empire, early sketches of Yoda and Boba Fett, and an original script page.

Go get your copy while supplies last!